If I was offered a one-day trip in a time machine and given the choice to revisit the past or peek into the future, I would choose the past. Of course, the people from my childhood who are no longer here would most certainly warrant a visit. My dad, whose presence I feel every day, despite the fact that he’s been gone for more than 23 years. My grandparents, particularly my maternal grandmother, whose sense of humor and huge heart left an indelible imprint on me. High school and college friends whose time on earth was far too short. Even pets who enriched my little-girl days. I’d love at least another 24 hours with them all.

Especially in this season of resolutions and looking forward, there is something about staying connected to the past that grounds me. And in the kitchen, more often than not, I find that the past is what inspires me.

I have so many wonderful food memories — far too many to enumerate. Some are attached to meals at special places that have long since closed their doors. Savory hot roast beef and gravy platters at the local Hot Shoppes; egg salad on cheese toast sandwiches at Hutzler’s lunch counter; pizza rolls in waxy bags from Silber’s Bakery; and sticky sweet banana splits from Howard Johnson are just a few that come to mind. I often recall food “snapshots” — moments disguised as insignificant but which somehow have resonated with me. The perfect tuna fish sandwich at my childhood friend Jane’s house, for instance, or picking crabs on the deck of the venerable Phillips Seafood.

Of course, food histories are borne out of special encounters with people as well. Recently I stumbled upon an old recipe book that once belonged to my husband’s long deceased grandmother, Rhona. Reading this 1964 collection of traditional Jewish dishes transported me to that place and time when trust, love and security were abundant and everything was somehow easier to understand. The pages of Grandma Rhona’s “Recipe Round Up” are yellowed, stained with who-knows-what, and decorated with margin notes in her fine, elegant handwriting. I read it cover to cover and smiled, thinking how far we’ve come and yet, how nice it would be to go back.

I didn’t get to spend much time with Rhona. She died when my husband and I were practically newlyweds. But I do recall one dinner, the only dinner we shared at her home. The dish was Chicken Cacciatore and — no surprise, here — it was delicious. Seated around the table in her humble but impeccably decorated apartment, the three of us enjoyed an evening of good food and a lot of laughs. Rhona was a dynamo of a woman who lived a colorful, interesting life and thus had great stories to share.  Though I didn’t know her well, her moxy, both in and out of the kitchen, has left its mark on me. 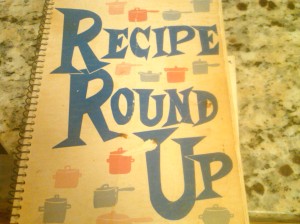 Grandma Rhona's "Recipe Round Up"

Rhona’s Chicken Cacciatore (as reinterpreted from Recipe Round Up(published 1964 by B’nai B’rith Women.)

Preheat oven to 400 degrees. In a large bowl, combine the fresh tomatoes, mushrooms and onions with approximately 3 T olive oil, generous amount of salt and pepper and the vinegar.  Toss to combine and spread in a single layer on a rimmed sheet pan.  Roast approximately 25-30 minutes until the vegetables are brown and have begun to caramelize.  Remove from oven and set aside.  Reduce oven temperature to 350 degrees.

Season the chicken with the salt, pepper, garlic and rosemary. Heat olive oil in a large skillet or saute pan and brown the chicken, approximately 6 minutes on each side. Transfer chicken to a bowl and set aside (*Note: chicken will not yet be fully cooked at this point).  With the heat on medium, add the red wine to the empty skillet and deglaze the pan until the liquid is reduced by about half. Stir in the canned tomatoes with juice, as well as the chicken broth and return to a boil.  Simmer for a few minutes to allow flavors to meld, then return the chicken to the skillet.  Place skillet in the oven and cook uncovered until juices run clear, approximately 30 minutes or more, depending on size of the chicken pieces.

Remove skillet from oven and add roasted vegetables, stir until the vegetables are heated through. Serve in a wide, shallow bowl over cooked pasta (or rice, if you prefer).